History
Over fifty years ago Norm Anderson, Sheriff Peter Pitchess, a group of Scandinavians and other like-minded folks gathered at the Sam Amundsen’s Finlandia Finnish Baths in the basement of the old Bing Crosby building on the Sunset Strip in Los Angeles. It was a place to get a steam, rub-down and a wrap. In the early days it was also a place to hear the talk of the town and rub elbows with celebrities like the Crosby brothers, Kirk Douglas, Humphrey Bogart, Cornel Wilde, Tony Curtis and Hugh O’Brien.  After these treatments, refreshments were provided from across the street at Ken Hansen’s famous Scandia Restaurant.
​
It was during these gatherings that the idea for the Vikings was conceived. Lynn Howard was our first Chief, Everett Crosby was Vice-Chief and Ken Hansen, the owner of Scandia was the Meister. Our official launch was grand and glorious: Sheriff Peter Pitchess arranged to close down the most prominent part of the Sunset Strip for a two-block parade. A horse-drawn wagon provided transportation for a traditional accordion player, piano and famed tenor-Lauritz Melchior. The Vikings became one of Los Angeles most popular social groups. Much of the credit for the early success was publicity by Dick Whittinghill, one of Los Angeles’ s most prominent morning DJ’s at KMPC Radio and one LA’s most notable TV news anchors- Jerry Dunphy. Adding to the buzz of The Vikings were famous and prominent celebrity members including: General Jimmy Doolittle, Nipsey Russell, Tom Harmon, Broderick Crawford, Barry Goldwater and Walter Cronkite.
Vikings Charitable Tradition
The Vikings realized early on that there should be “more” to their tradition and that more would be found in acts of giving; giving to the most vulnerable and needy in the local community; kids. That call to action created, ‘Viking Charities.’

That tradition of giving continues today; over 65 years later. Fund Raising and Giving includes events such as: All events are open to all Vikings, spouses and guests. Lunches are still at noon on the last Monday of each month.
Viking Charities represent a unique and long standing Los Angeles tradition of camaraderie and community support. If you would like to become a part of The Vikings as a cause we support, a Member or Donor please contact us.
We Are
Viking Charities is a social network of professionals who give to the community.
FAQ
How long have Viking Charities been around?
Since the 1950's.

How to you collect funds?
We work with donations and put on fundraising events.

How much of what you raise goes to charity?
100%. All donations go directly to programs to help disadvantaged children and their families. Donations are tax deductible. Administrative costs are paid by Membership dues.

What Charities do you support?
We support approximately 10 local Los Angeles area charities. Some are listed on the website here.
​
How can I help?
Contact us to become a Donator and or Volunteer.
LAPD AWARD 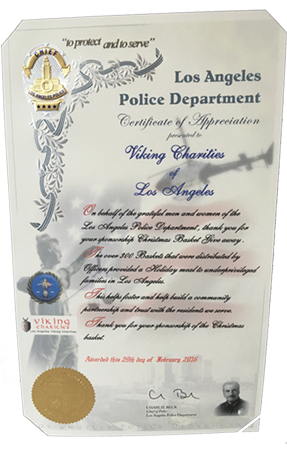